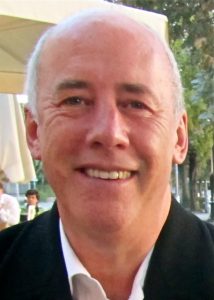 I was a founder of the Shiatsu Society UK and for many years was editor of the Journal of Shiatsu and Oriental Body Therapy . Now I run the Postgraduate Programme at the School for Experiential Education and teach postgraduate courses in Switzerland, Spain, Holland, Germany, Austria, Greece, Italy, Israel, Canada, Australia and the UK.

As well as my background in Shiatsu, I trained in Developmental Movement Therapy and in Voice Based Psychotherapy using voicework from the tradition of Alfred Wolfson and Roy Hart. I studied Chinese Herbal Medicine with Ted Kaptchuk, Body-Mind Centering with Bonnie Bainbridge Cohen and Feldenkrais Method with Moshe Feldenkrais. For five years, I was a trainer for the Gestalt Trust’s psychotherapy training programme in Scotland and Northern Ireland. In 1987 I founded the School for Experiential Education as a centre for learning Movement based therapies.

I have had a varied career in parallel with my therapeutic work: I was a teacher in Islington Schools during the 70’s then taught in London University while studying for a PhD in theoretical physics. I next got a job teaching media techniques in the Central School of Speech and Drama and then as a researcher in Brunel University. During an extended sabbatical from the therapeutic work I got funding to set up a company to implement some of the ideas from that research to develop applications of Artificial Intelligence.

My interest in Shiatsu started while I was practising Aikido with Minoru Kanetsuka in the early 1970’s.  His simple but powerful form of touch has been the continuing inspiration for my work even after I learned more theory and technique from other teachers. In 1979  I started teaching Movement and Shiatsu classes in London. From 1980-1985 I collaborated with Kay Coombes in making films of treatment for babies with Cerebral Palsy. Observations of these babies inspired my research into the developmental function of meridians.

In 1985 I started to synthesise all the strands of my work into a form of therapy, which focused on helping people to explore themselves and process issues through the body. I ended up calling this work Movement Shiatsu and you can read an article tracing its development here .

My central belief is that we, as individuals, are not wise enough to know what is best for another person. Therefore, I don’t try to understand what to do by diagnosis and theory. Instead, I focus on helping people to feel into themselves through their body sensations, and trust their natural life process to do the therapeutic work. My work is now more like education than therapy. Since I believe the meridians to be the pathways along which the mind learns to inhabit the body in childhood, they provide one of the best ways of helping a person’s awareness to reach hidden and blockaded parts of the self. The meridians are the guides, teaching us about ourselves through the body.

I have written many articles exploring this approach, some of which are available online. At present I am in the middle of writing a book about it.