In several classes, when doing the first series of Inner Qigong, I have suggested that people feel the ground pushing up on the soles of their feet and then use that feeling to feel the upward force supporting their body. 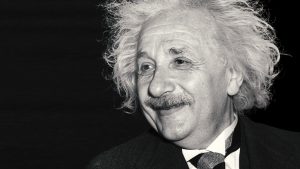 I have also said that according to Einstein, this is the reality- that the force of gravity is in some way an illusion and that what we really perceive is the way in which the floor stops us from moving down.

This has caused some argument and confusion. Isn’t gravity a real force?

Actually, no, it isn’t in the sense that we normally mean it. The downward movement that the floor interrupts is not caused by a force. The effect of gravity is actually more subtle than that, and the real force produced by gravity is a tidal force squeezing us sideways and stretching us lengthways. This is too subtle to notice at our scale. But the earth notices it and that is the cause of the ocean tides.

But forget that, it confuses matters. Why is the downward movement that we experience when we jump off a cliff not caused by a force? 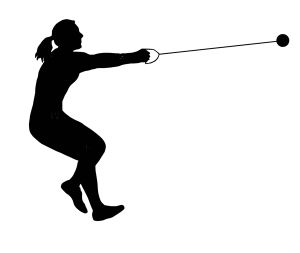 A very good analogy is swinging a ball on a chain:

You think that you ‘feel’ a force pulling the ball outwards. This is often even called ‘centrifugal force’. But what is actually happening is that the ball, left to its own devices, would travel off towards the horizon in a straight line. It is actually the force that you are exerting to pull the ball in towards you that is the real force, pulling the ball out of it’s natural state of movement. It is the inertia of the ball, ‘wanting’ to travel in a straight line, that gives the illusion that the ball is pulling on the chain with a force.

The same is true of gravity. Our natural movement in the vicinity of the earth, is to fall downwards weightlessly. We would feel no force at all. This is what astronauts experience. It’s not that there is no gravitational field in orbit but that they are freely falling in it, so don’t experience any weight or force. The speed of the spaceship is such that they fall ’round’ the earth rather than falling to the ground. Isaac Newton was the first to think about this.

Newton asked what would happen if you fired even faster. He reasoned that the cannonball would maintain a constant height from the surface of the Earth – in other words, it would move in a circular orbit. This is what a rocket is used for. It is not to propel the satellite to a place where there is no gravity but to accelerate it to enough speed so that it is orbiting in the gravity field rather than falling back down to the ground.

So if there was no ground to stop our movement, we would feel no weight and no force (or no downward force) . What gives us the feeling of weight is the reaction of our body to being stopped from moving by the upward force of the ground. 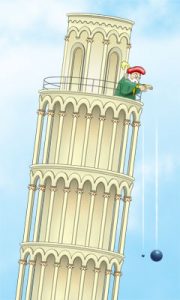 Galileo and the Tower of Pisa

Another way of seeing that gravity is not a force like magnetism is to see what happens if you drop two different weights from a height. Galileo performed this experiment (maybe from the Tower of Pisa but maybe that’s an urban myth).

He found that the two weights dropped at exactly the same speed. This was tested again on the moon (where there is no air resistance) and a feather and a hammer were dropped simultaneously by David Scott and hit the ground simultaneously. (see this on https://www.youtube.com/watch?v=5C5_dOEyAfk).

In contrast, if you have two magnets, one strong and the other weaker and you place them close to another big fixed magnet then the stronger magnet will move faster than the weak one. This is what a ‘real’ force looks like. You double the amount of force and the acceleration doubles. The analogy to the strength of the magnetic force in the case of gravity is the ‘mass’. It is mass that responds to gravity but things with more mass do not fall faster than things with less mass (as long as the larger mass is not big enough to create a sizeable gravitational field itself) .

So I hope you can see that gravity is an illusory force and the real force that we feel is the the ground pushing up on our feet. So the visualisation of the qigong is a real energy, not just our imaginations.

These posts describe what we do and the philosophy behind the work.